The town wanted to know: How would construction of a 1 million s.f. Facebook data center impact local roads and infrastructure over the 8-10 year duration of the upcoming project? The town government of Eagle Mountain City, Utah had prepared for this moment for decades. They had methodically planned to attract a high-profile anchor for their new tech center. Now the opportunity had arrived and it was important that everything run smoothly, not only for Facebook but the townspeople as well.

So they voiced their concerns to the general contractor, M.A. Mortenson, who it turns out was also motivated to understand the impact its construction activity would have on the town site. After some back and forth, it was suggested that pre-construction site conditions be documented somehow so changes could be detected and mitigated if necessary. The parties also determined it would be a good idea for M.A. Mortenson to have site condition data to help with quality control and to protect their own interests. They subsequently took the lead in finding a professional to collect the data and the best way to do so.

Mortenson needed a solution. What was a cost-efficient method for capturing the pre-existing conditions of the large construction area, adjacent roadways and the empty lots that would be used extensively for construction purposes? An aerial photogrammetric survey would capture the needed data but would be costly. A conventional ground-based topographic survey would be inefficient, even more costly and take weeks to accomplish. Data from ground-based photography would be incomplete and a challenge to review.

The long duration of the project also meant that the same data would need to be acquired periodically for comparison to original conditions. It was crucial that data acquisition be easy and cost-effective to duplicate. All these requirements pointed to an aerial-based solution providing high-resolution photographic data. A picture of site conditions was needed, not a map. That’s when the idea of using a drone came up. If provided from a Licensed Land Surveyor who was also a Licensed Drone Operator, photographic data from drone flights could be relied upon for an engineering and construction project like this. 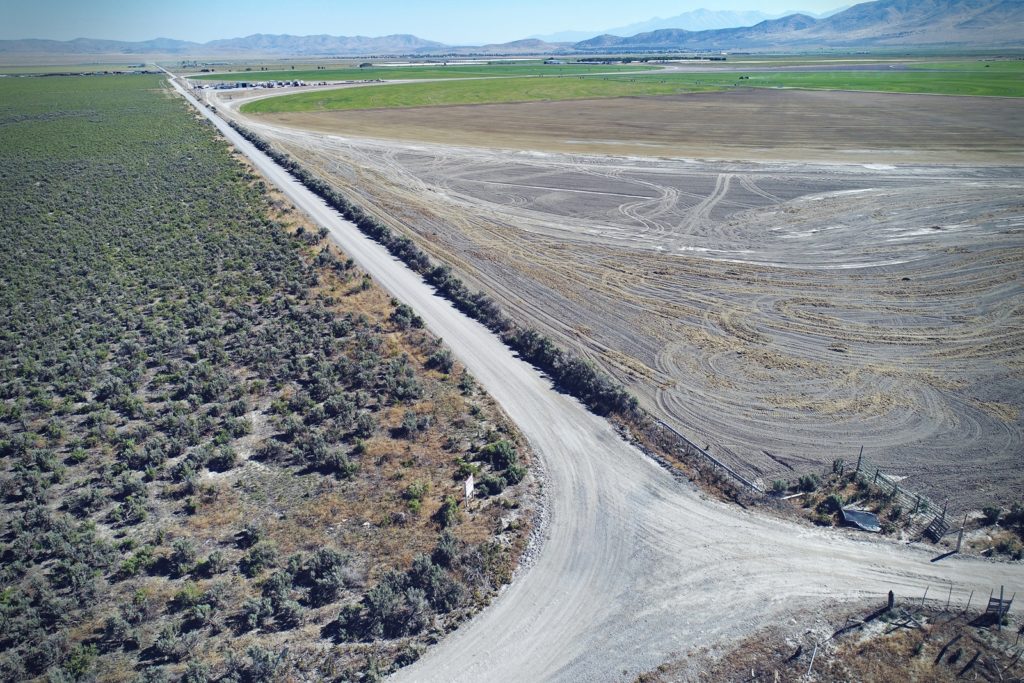 Enter Arizona Surveying Inc. With a team of Licensed Land Surveyors having decades of experience collecting data related to engineering construction work that also included a FAA Licensed Drone operator, we were the perfect fit for the needs of this project. After some initial consultation, Arizona Surveying was subsequently hired to provide the following high-resolution oblique aerial photography using our drone and its related technologies:

-Focus Areas: Still photos at a 45 degree oblique angle of townsite roundabouts and an existing well. Images captured between 50’-100’ from center of area with a minimum of 8 photos per each area showing existing feature conditions.

-Site: Still and video imaging performed at a 480 acre area with a panorama pattern to cover existing conditions captured between 90’-120’ AGL.

With the flights scheduled, Bretton made the one day journey to Utah. Before flying, he scouted the area and found good locations to safely see and operate the drone from. The flights were then executed and the visual data acquired. Checks were made of the files and everything was in order. The entire aerial operation was completed by one man in one day. The next day Bretton packed the gear and drove back to Flagstaff.

At our Flagstaff office, the data files consisting of still images and video clips were downloaded, processed, checked for spec compliance and then delivered to Mortenson remotely via Dropbox. Easy. The files were all date-stamped with day/time of flight providing a legal record of the process.

With pre-construction site conditions now recorded, Eagle Mountain City and M.A. Mortenson the general contractor now have the option of conducting additional flights during the course of the project to identify areas of concern and “hot spots.” Any identified problems can be addressed early before they amplify and become expensive to mitigate. The key concept here being “change detection.”

Aerial oblique photography from our drone proved to be the perfect tool for the needs of the contractor and the City. Periodic aerial photos should be standard procedure for any substantial construction project. Now you don’t have to rely on memory to see the details that would otherwise be missed. You also have a tool and data that demonstrate and verify construction impacts to the all-important project owner as well as local government. The bottom line is this: UAV/drone data capture is safe, easy, cost-effective and can be deployed quickly. How will you use it to save time, money and protect your vital business interests?