According to the state’s Historic Bridge Inventory, the Chevelon Creek Bridge is “one of Arizona’s most historically and technologically important spans and was the first truss ever built by the state and was designed, fabricated and erected by a nationally important bridge firm.” It was built over 100 years ago when the newly-formed state legislature appropriated $5,500 from the State Road Fund for its construction. 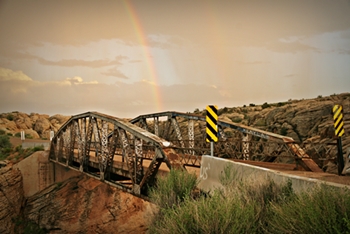 The bridge scores 94 points out of 100 in the Arizona Historic Bridge Inventory. The rating is based on the fact it was included in the Transcontinental Route and also because it was one of the first significant road structures undertaken by the newly-formed state of Arizona. The inventory also notes the bridge represents a type, period or method of construction and is associated with significant events or patterns.

Those historic factors, along with the formerly poor condition of the structure, are the reasons a restoration plan had long been in place for the bridge. When plans were approved and bidding completed, a contractor was selected and construction began in 2013 with Arizona Surveying playing a key role in the restoration project by providing land surveying services. 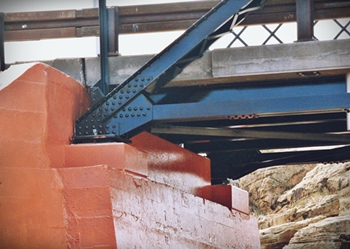 The original bridge was comprised of two main components: the steel truss structure itself and a pair of concrete abutments—one on each side. The steel truss was secured to the abutments with large bolts embedded in their concrete.

For the restoration, the steel truss had to be jacked and raised above the abutments and the abutments completely rebuilt. Critical to this process was knowing the exact location of all abutment bolts before the truss was raised so the new bolts would be constructed in the same positions. This would ensure a proper fit when the newly restored truss was lowered onto the new abutment and bolts.

The original abutment bolts were exposed and subsequently located precisely and accurately by Arizona Surveying. With the bolt positions surveyed and perpetuated, the bridge truss was raised and the abutments replaced. The replacement process included surveying and relocating the old bolt locations on the new abutments. When the abutments and truss restoration were completed, the truss was lowered on to the new abutment bolts. Perfect fit!

Today, the bridge still serves as an important transportation corridor for drivers in Navajo County. After the completion of the recent rehabilitation project, it wouldn’t be unreasonable to believe that the bridge will be around for another 100 years. Take a drive to Winslow someday to see it and don’t forget your camera.