Grand Canyon National Park (GCNP) is one of those unforgettable places that can change a person’s life. More than six million people enjoy its sublime vistas every year.

Water is a natural feature of the park, most noticeably the raging Colorado River as it cuts its way through the canyon’s ancient landforms and winds through the southwest desert. But water is also the park’s lifeblood, allowing visitors to safely and comfortably enjoy the park.

GCNP is one of America’s most popular natural attractions, but without a safe, reliable water supply, it would be unable to accommodate so many visitors in its harsh desert environment. Those visitors, 90 percent of whom flock to the park’s south rim where the views are most accessible and most spectacular, depend on a clean, reliable supply of water in a place where little occurs naturally.

Potable water is supplied to the south rim via the Transcanyon Waterline, built in 1964 as a means to provide secure water at volume needed to supply a growing number of visitors and associated development. As the waterline ages, the need for repairs becomes more frequent. Periodic failures are now treated as emergencies due to the critical nature of water service. In recent years it has become clear that the waterline’s service life is coming to an end.

On May 8, 2019, NPS finalized a plan to replace the Transcanyon Waterline. This set in motion the Transcanyon Water Distribution Pipeline Project. Arizona Surveying Inc. (ASI) of Flagstaff was selected to do the ground-based survey and mapping needed to support the project.

The Transcanyon Water Distribution Pipeline Project planned to relocate the water intake for the pipeline from Roaring Springs below Grand Canyon’s north rim to an area along Bright Angel Creek near Phantom Ranch, a lodge at the bottom of GCNP. It would then replace approximately three miles of the pipeline between Phantom Ranch and Indian Garden Campground and construct water treatment facilities and tanks to support the water system.

ASI’s mission was to provide survey and mapping support for the project. An aerial-based lidar survey of the pipeline corridor had already been produced. ASI’s task was to match the aerial survey ground control and provide ground-based topographical mapping to supplement the aerial survey.

Bretton Luckow, Levi Nash and Bryan Martin formed the ASI crew responsible for the field surveying in the canyon and associated logistics. Over the span of five weeks, the three would spend four weeks in the canyon. John Luckow, RLS, and John Scott, RLS, provided technical and other support from ASI’s Flagstaff office.

Typically, a survey crew would simply load a day’s gear in the work truck, drive to a job and have easy access to everything needed to get the job done. But surveying in Grand Canyon is anything but typical. Climate and geographical challenges made the survey daring. Equipment had to be carried on trails of soft sand, up steep and rocky slopes, and at times on narrow trails that ran along the edge of cliffs that dropped 100 feet to the Colorado River. Some sections of the pipeline are not traversable by a human without climbing equipment or walking along the pipe while balancing 80 feet in the air.

The NPS has access and use restrictions in place to preserve the visitor experience and safeguard the fragile ecosystem, but such restrictions make a surveying job all the more challenging. For example, no motorized vehicles are permitted on the ground below the rim in GCNP, meaning all equipment and supplies had to be carried in or flown in by helicopter.

The crew’s days started at sunrise and often ended after sunset in order to get the sheer volume of data points needed. The three surveyors stayed in bunkhouses but were able to maintain a safe social distance and still share meals while talking about the experience.

On Monday mornings, the survey crew planned and assembled every piece of gear needed for a week’s worth of surveying, then weighed and packed it for transportation. The equipment was then flown by NPS helicopter to a drop off point in the canyon.

Once in the canyon, the gear had to be carried a mile to Phantom Ranch, where the crew would stay, and then repacked into backpacks for travel along often steep trails to the waterline corridor. At times, each member of the survey crew carried as much as 70 pounds of gear, including survey equipment, food and water.

Due to COVID-19 social distancing restrictions, the three were unable to hitch a ride on the NPS helicopter that was shuttling their gear. So at the beginning of each workweek, the three hiked more than seven miles from the south rim down to the staging area. At the end of the week, they hiked back out.

“It was like going back in time,” says Luckow. “You’re completely cut off, isolated, and on top of it all, COVID had the park totally shut down. It was probably a once in a lifetime experience for all of us.”

Encounters with wildlife during their weeks in the canyon were not uncommon, and sometimes too close for comfort.

The crew ran into deer, snakes and even a Giant Desert Hairy Scorpion. One evening in the bunkhouse, the crew was awaken by Luckow making his way out of his sleeping bag and saying: “Turn on the lights, I feel something in my sleeping bag.” The lights came on to reveal Luckow indeed had company in his sleeping bag. On his way out of the bag he had brushed a scorpion onto the floor where it now held its pinchers high looking for another victim.

Luckow had been stung on the leg but still managed to kindly scoop the scorpion up on a piece of paper and release it outside. Most nights the crew was alone at Phantom Ranch, but on this night there were some park trainees around. They photographed the scorpion and told Luckow he should “watch out” because scorpion bites can cause cardiac arrest and anaphylactic shock.

“Needless to say, I was a bit worried since I’d never been stung by a scorpion and didn’t know how my body would react,” Luckow said. “Being so far from any medical facility really hit home and I proceeded to roll around restlessly for another hour and a half before finally falling asleep.”

Sometimes the best things in life happen when we least expect them. With pandemic restrictions in place, GCNP was closed to visitors and access restrictions turned out to be a blessing in disguise for the survey crew. Except for seeing a handful of park rangers, they worked alone in the canyon.

“Not seeing other people in the canyon felt like being there 100 years ago,” said Martin. “The Transcanyon Waterline survey was deemed essential for the project. The fact that the National Park Service allowed our work to continue with everything going on was a source of pride for the crew.”

Using Trimble R8 and R10 GPS receivers, the field crew tied into all found control points set for the aerial-based lidar survey – occupying and collecting data for minimum two-hour static GPS sessions. They also set and tied their own control to supplement the aerial control. Enough control density was needed within the corridor work areas to provide backsight and foresight checks for conventional surveying with a total station.

The aerial survey was unable to provide adequate coverage along numerous sections of the pipeline corridor. Filling in these sections with ground-based mapping constituted the bulk of the work for the field crew. RTK GPS was used for topographic mapping in corridor locations with sufficient satellite coverage. A total station was used for topographic mapping in areas under a canopy of dense native cottonwood, willow and sycamore trees. It was also used where masking angle issues near and through high canyon walls prevented utilizing RTK.

Finishing the Transcanyon Water Distribution Pipeline Project design survey is one crucial step towards new Grand Canyon water infrastructure project, scheduled to be completed in 2025. The mark of the surveyor is often seen first in projects like this. Arizona Surveying Incorporated’s work lays a foundation of information that guides scientists and design professionals who then create lasting improvements that benefit mankind. As with any infrastructure project, a surveyor’s work is rarely seen but often felt in the final product.

Three young surveyors left the world behind to survey a piece of history and contribute to the Transcanyon Water Distribution Pipeline Project. When completed, the project will serve millions of thirsty visitors at Grand Canyon.

Along the way, these surveyors unexpectedly discovered solitude that some go a lifetime without feeling. They also got first hand experience on how their usually quiet role would impact millions of people for years to come. Those are some of the best moments life can offer. 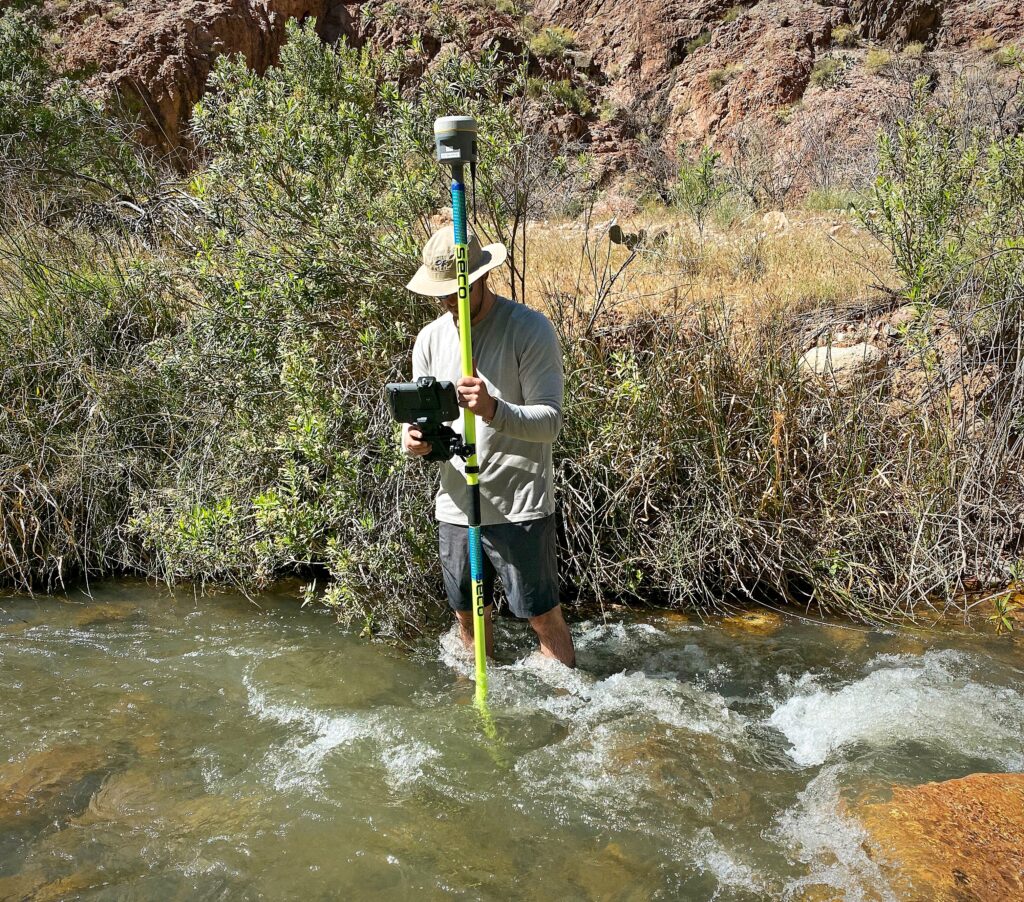 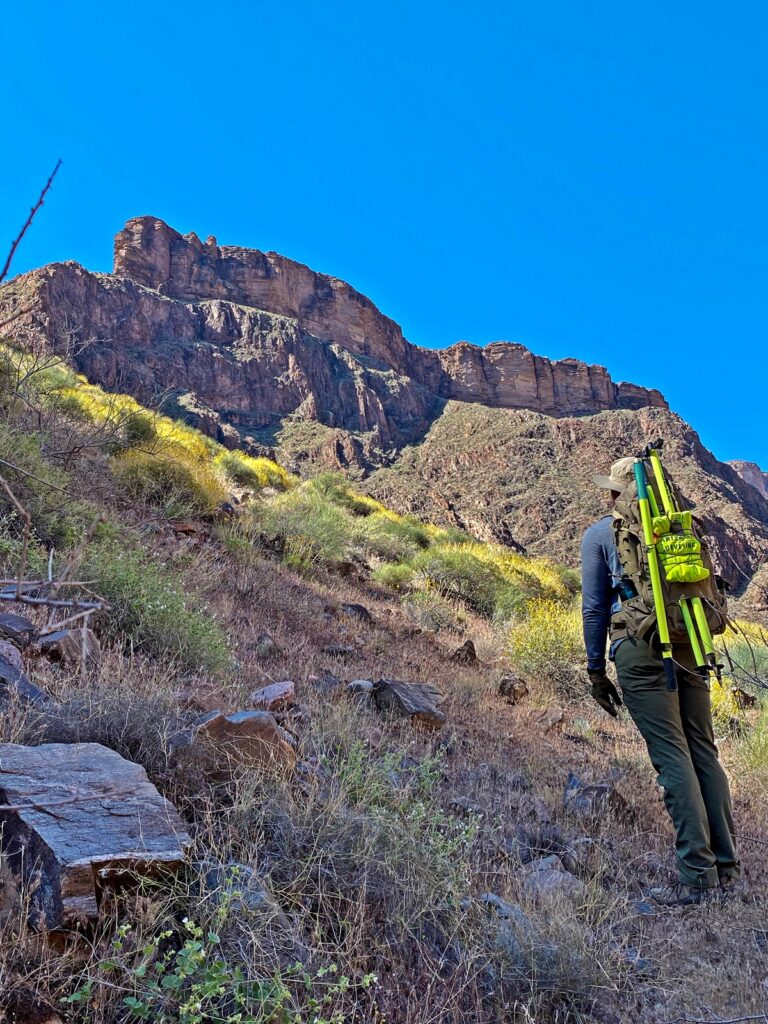 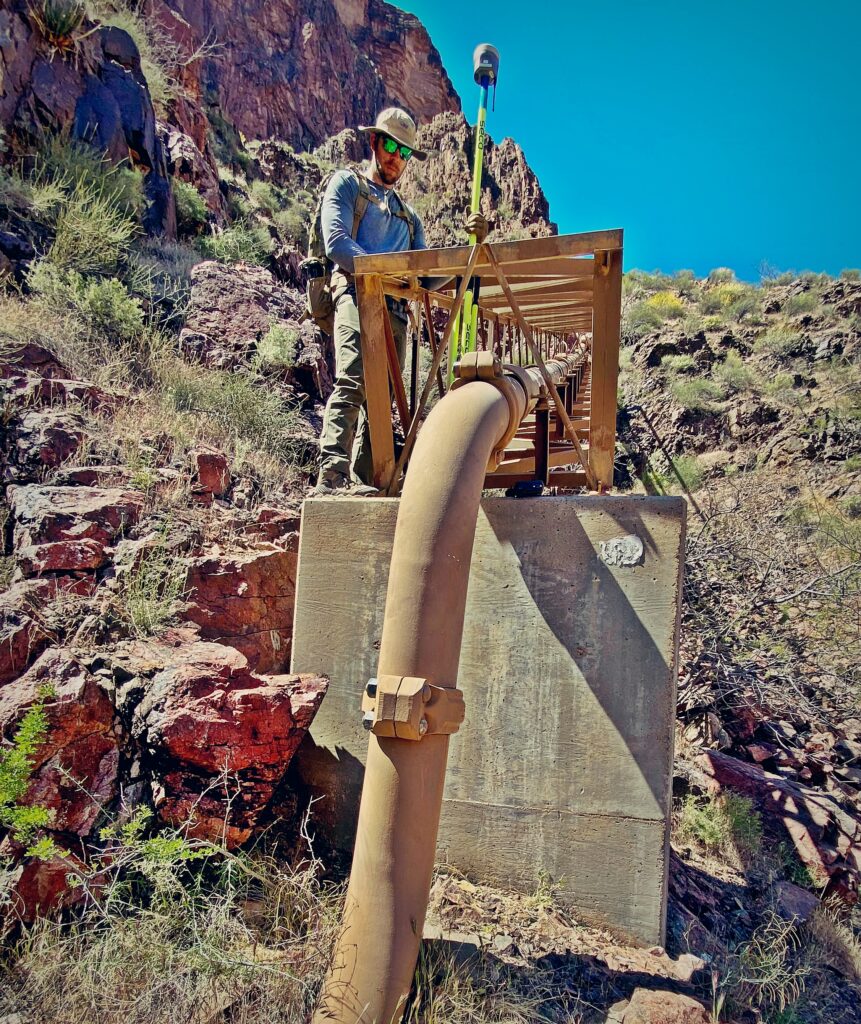 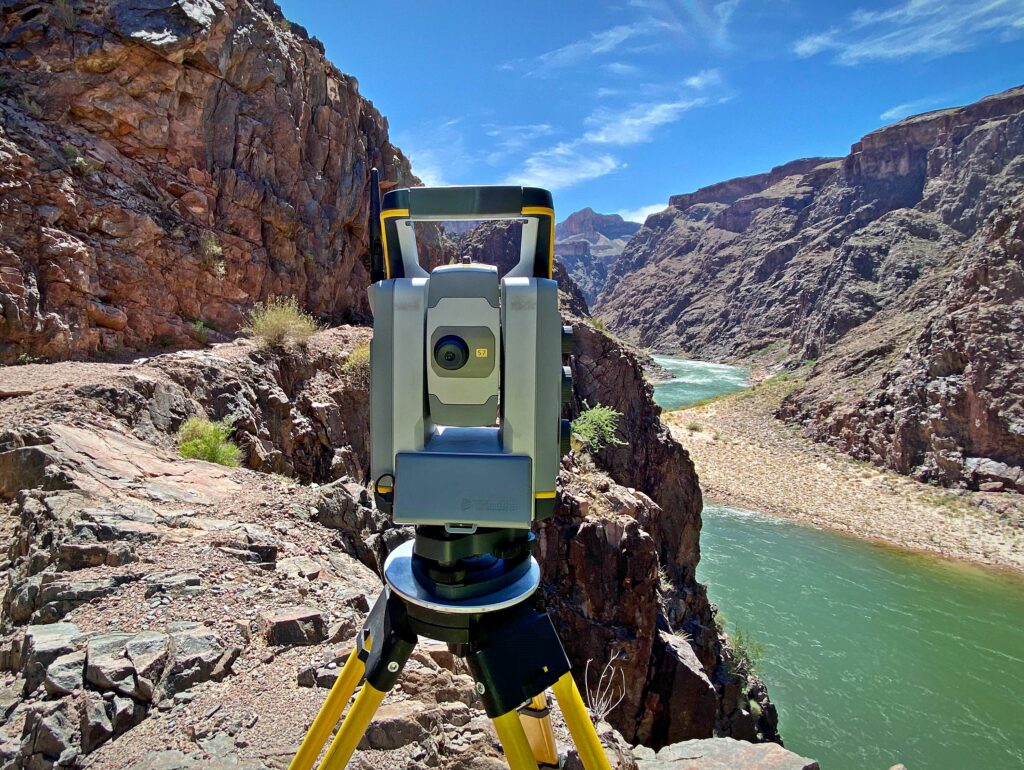