From the top of the cinder hill near Williams, Arizona, we could see to the rim of the Grand Canyon. The aerial drone survey we were conducting included the cinder hill we were on, an old pit operation on the side of it and some lowland bench with scattered Pinyon-Juniper trees. All total about 100 acres to map and produce a surface model of to support the building of a road and the reactivation of a cinder pit.

After identifying a good low-lying launch site, we started flying the first pre-programmed grid with our Aerotas DJI Phantom 4 Pro drone at a flight height of 400 feet. Smooth as silk. The first flight went off without a hitch and I couldn’t help but notice we’d just mapped 30+ acres in less than 30 minutes. 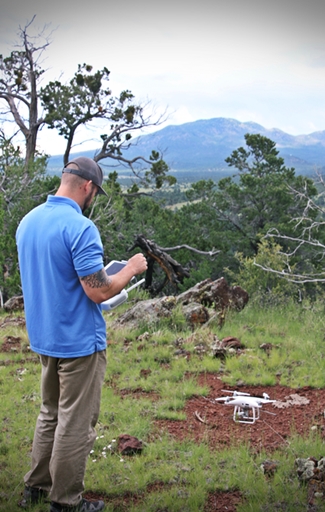 It was monsoon season in northern Arizona so as the day wore on skies darkened. The launch site for the next pre-programmed flight grid was on the top of the aforementioned cinder hill. We hauled the drone case up the hill over some very loose volcanic rock and found a good launch site. Before we could get the drone out of the box we had a little show. A restored P40 Warhawk WWII warbird from the nearby Planes of Fame Air Museum flew directly over our little cinder hill! What a sight and we couldn’t help but notice the irony of seeing a vintage manned aircraft fly over us moments before launching a tiny unmanned drone.

On top of the hill and under the darkening sky we started flying the second grid. This time the flight speed was noticeably slower—about half the speed of the first grid. Apparently the drone’s camera was slowing down its shutter speed to compensate for the lower light level. To avoid blurry photo captures, the air speed had to slow down too. This had a marked effect on battery life on board the drone. Where the first grid flight required one battery swap, this flight required four! Lessons: on every job bring the car charger and every battery you own; start recharging every used battery immediately after it comes out of the drone; and lastly, take all batteries with you up steep hills so you don’t have to walk back to the truck! 🙂

The third pre-programmed flight grid was similarly slow but we had the battery charging rotation nailed so everything went smooth if not speedy. With the mapping completed, our attention turned towards checking the horizontal and vertical control. Using GPS, we made redundant ties to nearby county monuments. We checked in 0.025h x 0.07v which was fantastic given the distance between points. Feeling confident in the quality of our mapping images and ground control, we boxed everything up and headed back to the office.